Over the past 21 years, Kieran Kelly Haulage Ltd. has developed an unparalleled reputation for reliability. The company is held in the highest esteem throughout the Clare / Limerick region and beyond, earning the kind of respect that can only be garnered through hard work, honest endeavour and genuine integrity all harnessed towards providing a top-quality service.
By providing a superb level of service at all times, the award-winning Ennis-based operator has gone from strength to strength over the years. Specialising in stone, subsoil, sand, gravel and muck-shifting, Kieran Kelly Haulage has every chance of riding out the current economic downturn and continuing to serve its clientele for at least another 21 years. 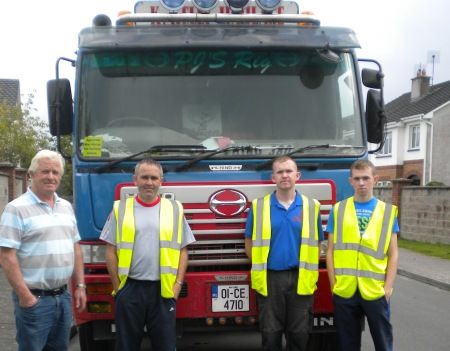 This is all harnessed to provide a top quality service. Kieran learned his trade from his father who worked in the haulage industry from 1948 specialising in sand, gravel and top soil.
The business was set up in 1990. It started off from fairly modest beginnings, with just one tipper truck, and built it up slowly. Kieran bought a couple more Lorries and grew the company gradually. Today, we have eight Lorries and three diggers.
Most of our work at the moment is for Ryan’s Quarry here in Ennis, which is owned by Roadstone and is only about five miles down the road. We also do a bit of work for Clare County Council and we are fully-permitted to carry out muck-shifting. Mostly, we haul the stone, sand and gravel out of the quarry to destinations around Clare and Limerick, for roadworks etc..
Kieran started out with Hino trucks exclusively but now operates a mixed fleet of Hino, MAN, Iveco and Scania. In the current economic landscape, it’s all about sourcing the best truck for the job and cutting your cloth accordingly. Kieran has always adopted a very practical outlook to running the business and this has served him well.
We maintain our trusty fleet in tip-top condition at all times and this has resulted not just in the highest levels of safety and efficiency – not to mention high praise from the public and fellow hauliers - but also in several awards, including the Best Working Tipper at the inaugural Full of the Pipe Show last year.

Strictly necessary cookies
These cookies are essential for visitors to be able to browse the website and use its features. None of this information can be used to identify visitors as all data is anonymized.

Currency
Purpose: To be able to show prices in the currency matching the visitor's preferences.
Duration: 30 days.

Google Recaptcha
Purpose: To be able to validate whether the visitor is human and to limit the amount of spam from contact forms.
Duration: 1 year.
Provider: Google.


Third-party cookies
These cookies collect information about how visitors use the website, like which pages they've visited and which links they've clicked on. None of this information can be used to identify visitors as all data is anonymized.

ga
Purpose: Registers a unique ID that is used to generate statistical data on how the visitor uses the website.
Duration: 1 year.
Provider: Google.

gid
Purpose: Registers a unique ID that is used to generate statistical data on how the visitor uses the website.
Duration: 24 hours.
Provider: Google.

We also integrate with social platforms on this site that allow you to connect with your social network in various ways. Social media integration will set cookies through the website which may be used to enhance your profile on social media sites or contribute to the data they hold for various purposes outlined in their respective privacy policies.